Jen Leahey’s neighbor came over to her house in Lee, MA one stormy summer night in 2019. She was holding a battered and bruised owl in her arms, hoping that Jen would know how to help. He had been hit by a car and suffered eye damage and massive internal trauma.

“There isn’t a lot you can do surgically with birds because they rarely survive anesthesia,” said Jen. “We could not save his eye and had to nurse him back to health slowly.”

Jen Leahey had been preparing to launch the Animal Connections program at the not-yet-opened Miraval Berkshires that summer.

“This owl, she said, “would look at me every day while he was healing as if to say I hate you through his body language. He would fan his wings out to appear larger or get into a lunging stance. He was angry, but he was also full of vitality and appetite. He just didn’t want to be injured or in captivity. We decided the best thing for this bird was to let him heal, but every fiber of him was saying he didn’t want this life and wanted to be free.”

Jen struck up a non-verbal bargain with the barred owl. “If you could just tolerate me through the winter,” she offered, “I will let you go in the spring.”

She kept the owl in the barn, and it clacked at her aggressively every single day throughout the winter of 2019-2020.  When spring arrived in 2020, and it was warm enough to be outdoors overnight, she put him in a flight cage in the woods to reacclimate him to being outside.

There is a step called the Soft Release in wildlife rehabilitation, which means you open the door to the cage and let the bird decide if they want to stay or go. He stayed and stayed and stayed.

“Finally,” Jen said, “one day he was gone, and my kids clapped and sang Born Free to celebrate his liberation.” 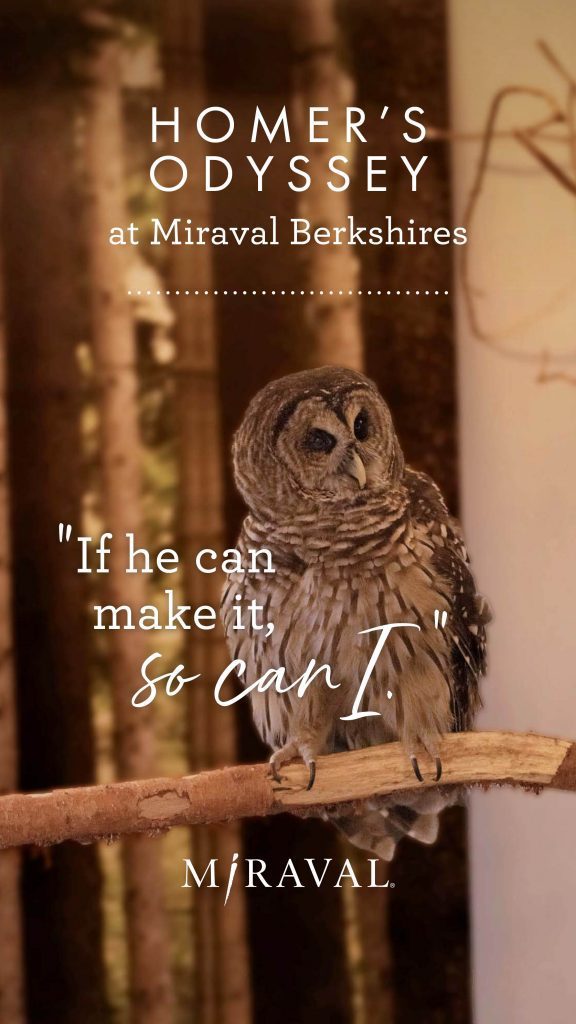 The owl had spent the winter with Jen at her family farm in Lee. She subsequently moved to a new home, about a third of a mile north of the farm.  In July of 2020, when Miraval Berkshires was just beginning to open, she got a call from her husband telling her an owl was at the door. And there he was, the same owl, in a place he had never been before: emaciated, dehydrated, and wounded, sitting on Jen’s soggy front steps.

He was suffering from an exposed-bone injury and infection. Jen scooped him up and brought him inside, fearing he wouldn’t survive the night. She swaddled him, fed him through an eyedropper, and nursed him back to health. As he began to recover from the infection, she brought him to Miraval and set up an enclosure for him.  He has been there ever since, claiming it his territory, and will not move from it.

“He decided,” said Jen, “that he needed me again. We created a different type of partnership based on mutual respect.”

They named him Homer, both for the epic odyssey he had survived and for the notion of home and the many ways we define it—physically and symbolically. “He found a second chance here at Miraval,” explains Jen, “as so many do when they come to visit us. He learned to ask for help, accept it, and find a new way to be in the world.”

If ever there was a living metaphor for asking for help, this was it. Even this obstinate, independent owl knew when it was time to reach out and accept a helping hand.

I met Homer last summer when I visited Miraval Berkshires to celebrate my first trip away from home after the long lockdown of 2020. I hung out with Homer, just standing there in parallel space. Like the rest of us, he was renewing and reviewing how we define freedom, home, and safety. He was reimagining life after loss and how to create sanctuary and kinship, even in stormy and uncertain times.

“Our guests find great comfort in Homer’s presence,” Jen tells me. “They often spend time with him and, after hearing his story, tell me: if he can make it, so can I.”

Jen Leahey is Miraval Berkshires’ Animal Connections specialist.  Click to learn more about her programs with Homer and other birds of prey, such as Raptors & Resilience: Life Re-envisioned.

Life in balance by Miraval